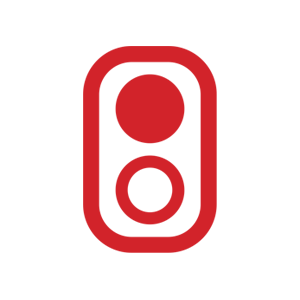 SITE provides certified expertise in the fields of advanced integration services and telecommunications systems and infrastructures; it designs, produces and installs signalling products and devices that control railway safety. 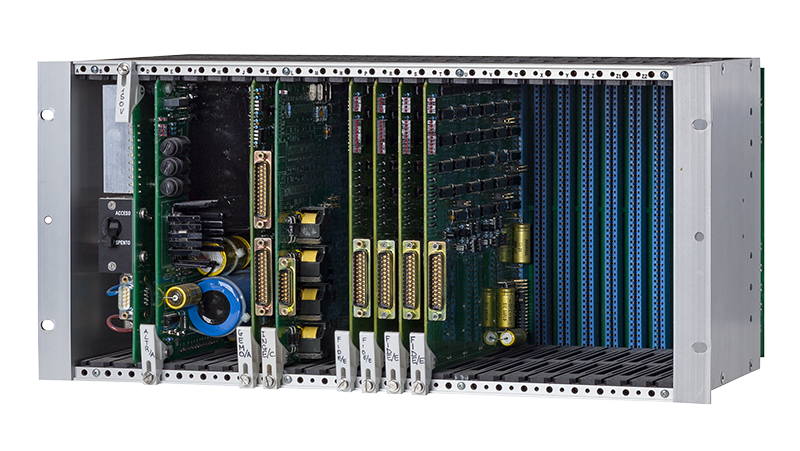 The Automatic Coded Block Systems (B.A.C.C.) ensure safe spacing of trains along double-track lines allowing the driver to have a continuous early view of the signals ahead, and automatically stop the train in the event of crossing a closed track signal.

OVERALL DIMENSIONS OF THE BRAKESMAN’S CABIN

The system consists of track circuits fed by encoded currents (block sections), using inductive connections, that are as near as possible to 1,350 m long, but not longer than 2,000 m. The system uses brakesman’s cabins made of fibreglass and positioned near line signals, containing the equipment necessary to receive and generate codes that serve to change signals according to these very codes.

The additional carrier frequencies that can be used as an alternative to 50 Hz are 75 Hz and 83.3 Hz.
The B.A.C.C. system can also be used to check the integrity of railway track joints; in case of joint breakage, the system signals that the given track section is closed for traffic. 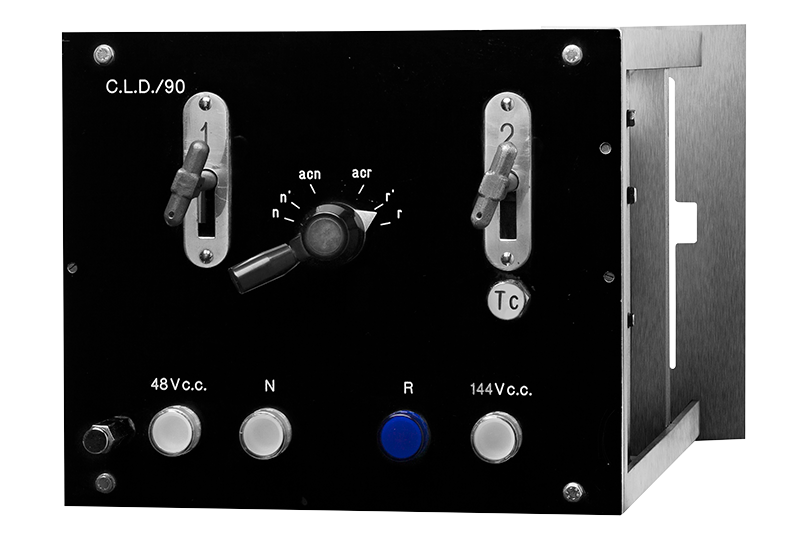 The local switch control (CLD) is a device that can control electronically a local mechanical switch in the absence of its centralised electromechanical interlocking signalling system (A.C.E.I.).
In addition, it always provides control over normal or reverse switches.
The CLD is put to a prominent use during switch assembly and calibration prior to installing the related A.C.E.I. cabin.

This is an easy-to-use device that is at the same time extremely useful and highly reliable, due to the fact that it has no delicate internal components such as relays. One of the advantages offered by the CLD is that the adjustment and tuning of its switch mechanism allow you to skip the need for such adjustments in the later phase of A.C.E.I. commissioning. The CLD is normally used also during maintenance of safety equipment (IS).

The CLD is equipped with an electromagnetic lever for the switching; two keys, one normal and the other reversed; and four indicator lights. The lever and keys are mechanically connected to ensure their correct relative positions.
The CLD operation is very simple. 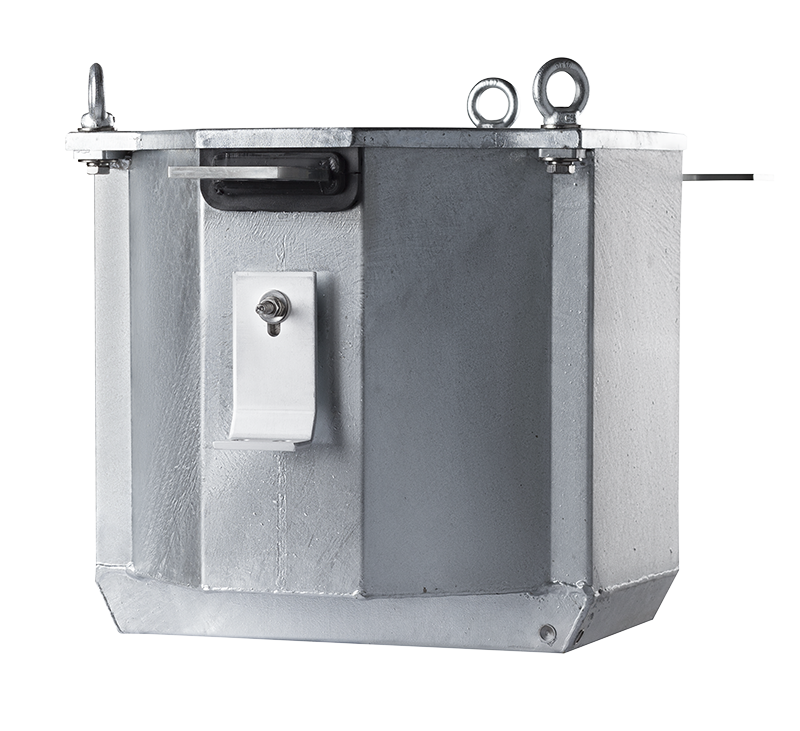 Equipment used by the Italian Railway systems to ensure continuous flow of direct-current in the return circuits of trains’ electric traction (TE).
Inductive connections offer low resistance to the passage of the traction direct current and at the same time a high impedance to the encoded alternating currents, necessary for detecting the presence of the train on the track.
The inductive connections consist of two windings formed by large cross-section aluminium coils, set inside watertight containers that are suitable for being placed near track joints and embedded in special resin to guarantee their integrity over time. 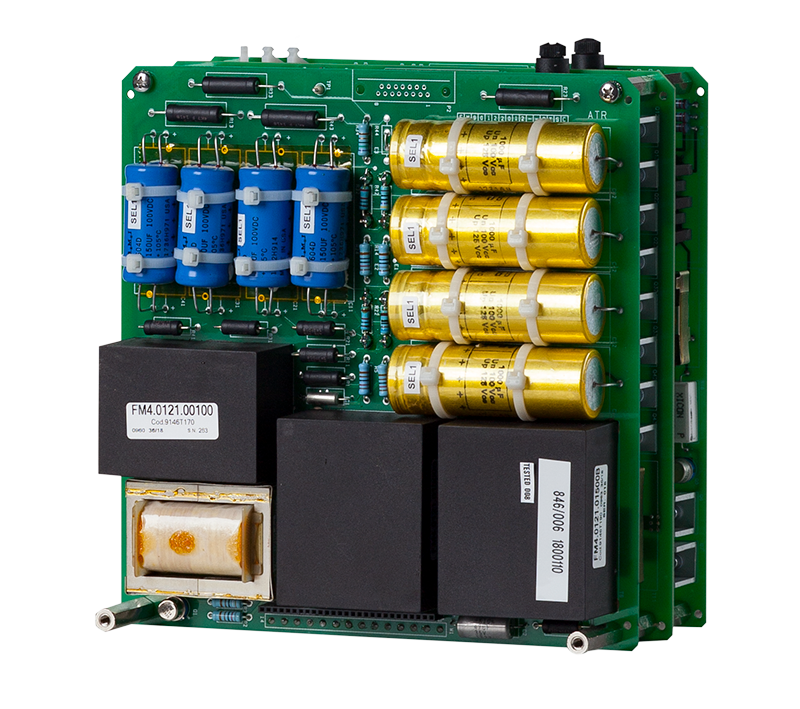 The imbalance detector verifies that the 50 Hz (or 83.3 Hz) parts of the current in the half winding within the receiving inductive boxes never reach a difference (imbalance) that exceeds a predetermined limit; otherwise it de-energises the track circuit relay and switches the relative signal to closed. The reading of the two rail currents is performed through two amperometric transformers (TA) which transform their voltage ratings proportionately to the input currents. It should also be considered that in the case of a perfect equilibrium of the traction current distribution on the two rails, the current associated with the track circuit on one rail is being added, while that on the other rail is being subtracted, leading to a situation of undesired imbalance. This problem is overcome by introducing a phase inverter into the transmission system. At each code period, the inverter shifts the code current by 180 degrees, thus rendering the value read by the imbalance detector (which has longer time constants) null on the average.

The imbalance detector consists of the following operational blocks: 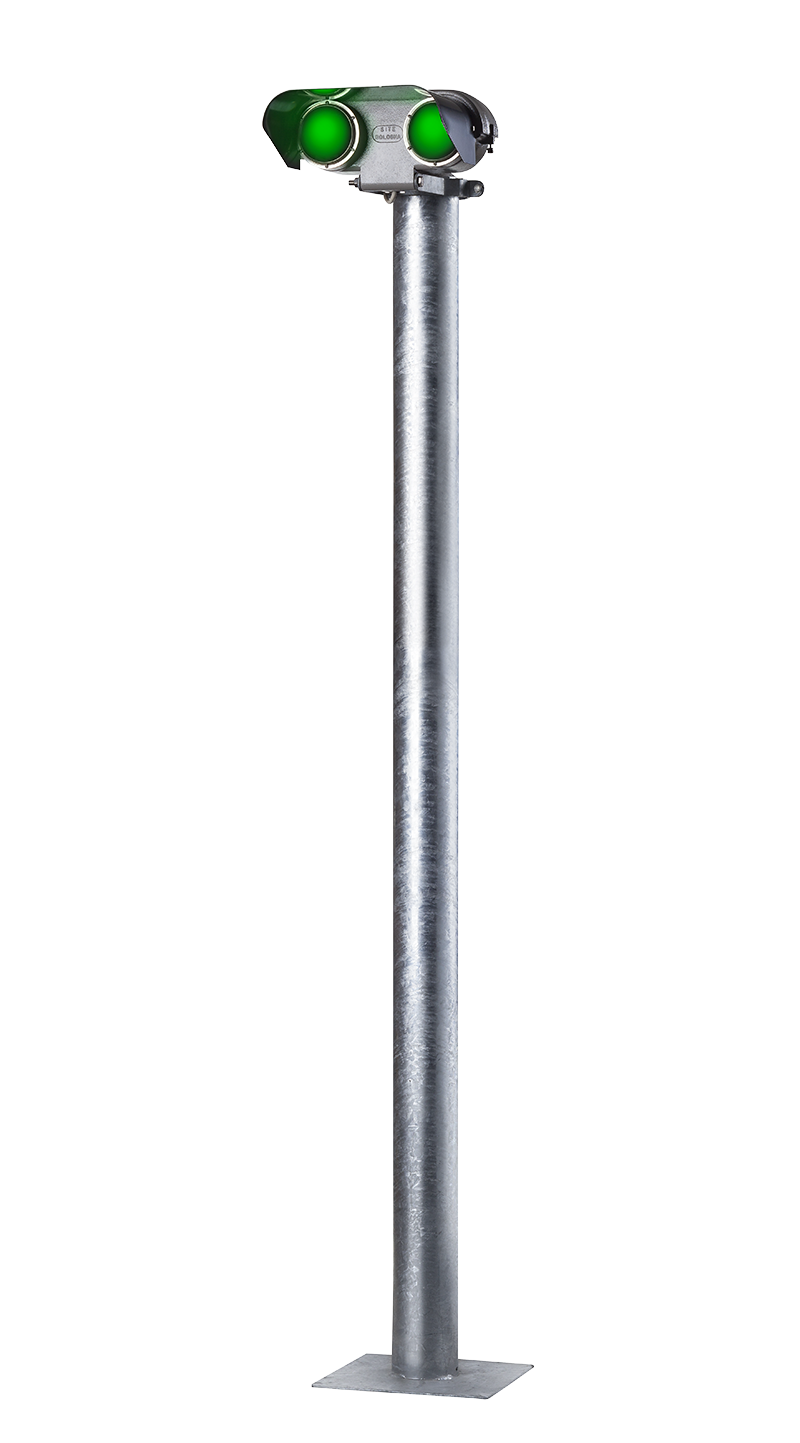 The go-ahead signal allows trains to enter the station, with the protection signal off or displaying blocked track. 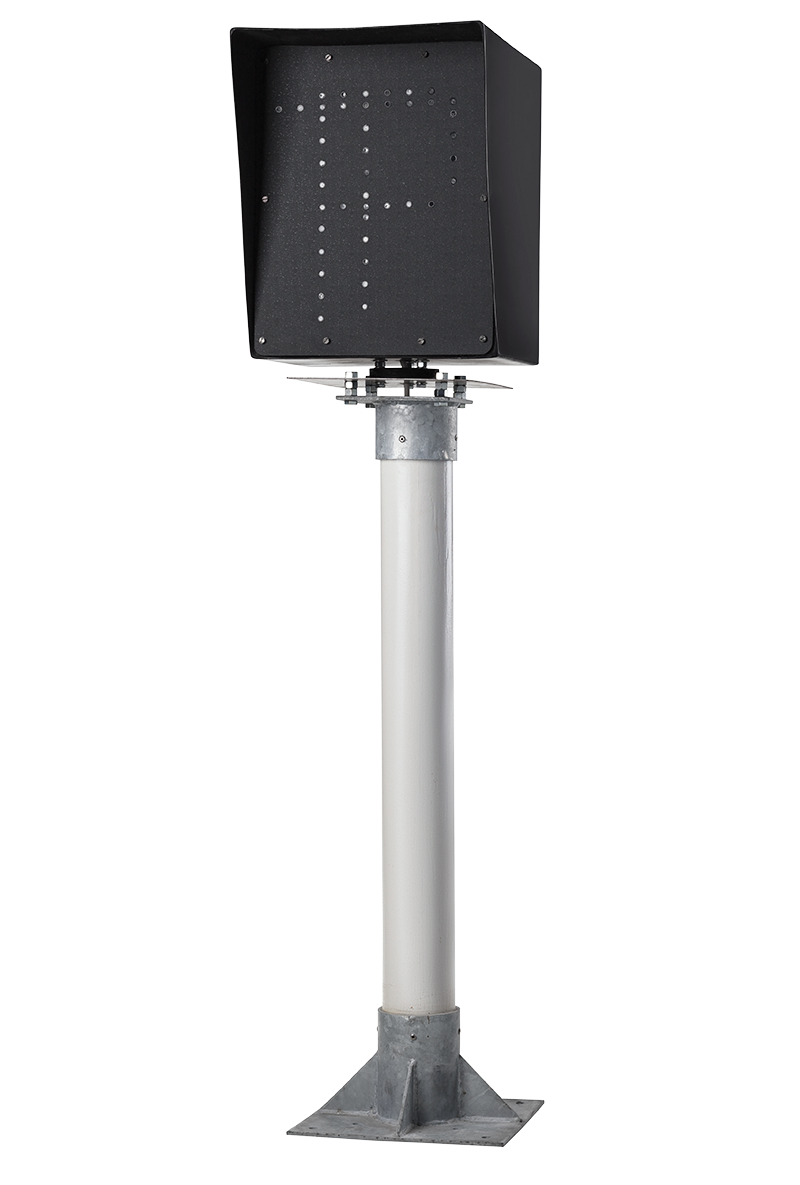 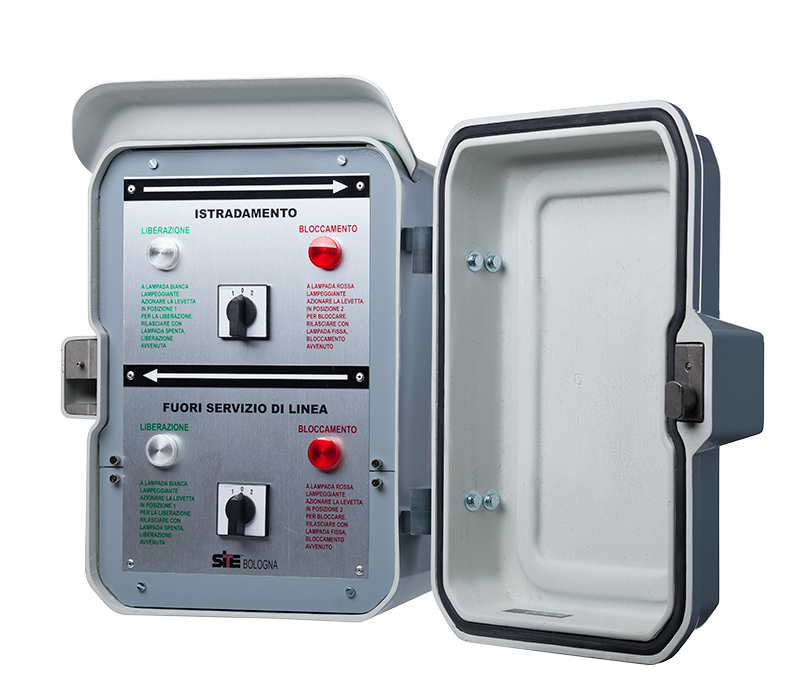 Devices supplied to Italian railway (F.S.) personnel on their remote control systems, used for blocking and freeing station tracks not used for line service. It is supplied in a watertight case (made of aluminium or fibreglass) mounted on a special stand and set according to the station protection signals. 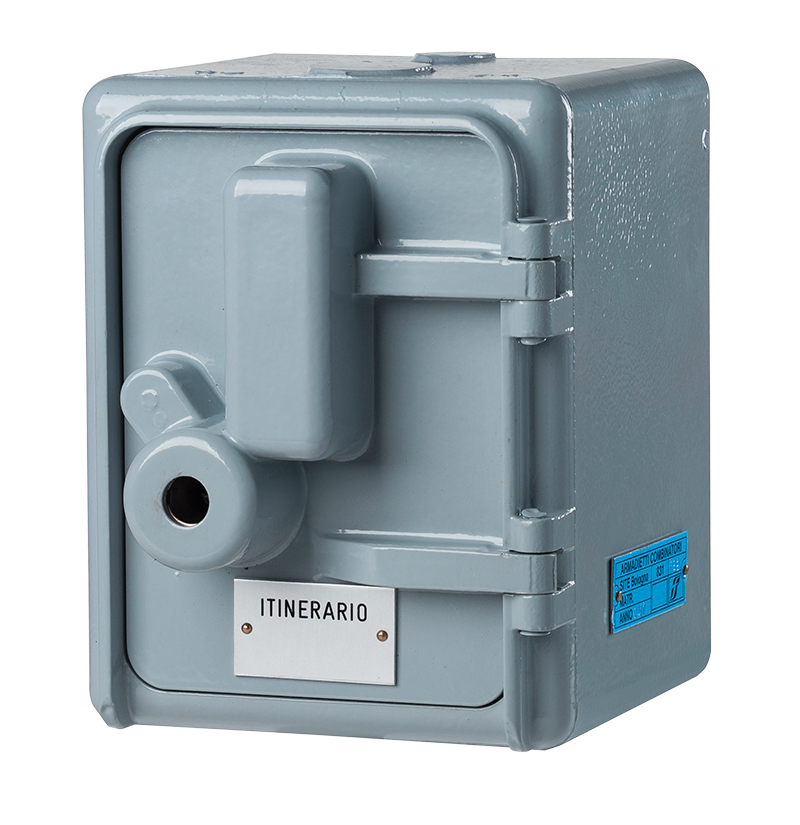 Devices supplied to Italian railway (F.S.) personnel and set on Automatic Coded Block Systems (B.A.c.c.), used to reduce track code flow and consequently the associated speed in the event of work along the line. It is positioned according to the given B.A.c.c. signals. They come in single or double versions. 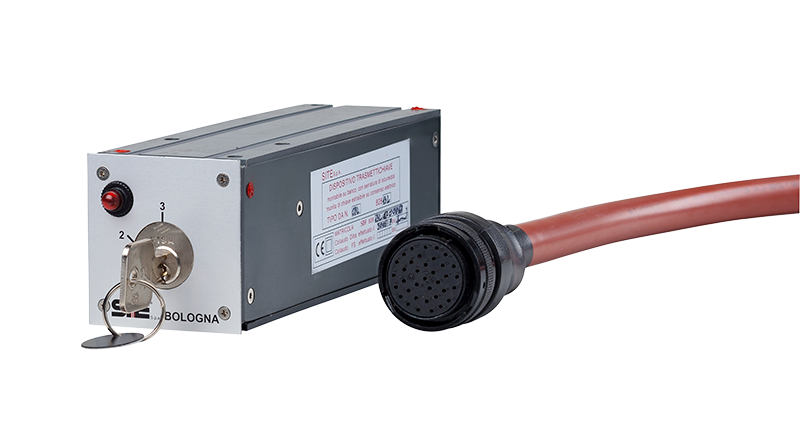 The device is used by F.S. operators to ensure that maintenance work is performed in safety, in station areas with remotely-controlled lines. This function guarantees safety by preventing train traffic in the part controlled by the key. Said guarantee is provided by extracting the key after an electronic consent has been received from the Station Operations Manager. The device is normally mounted on special maintenance cabinets located in the Traffic Office. 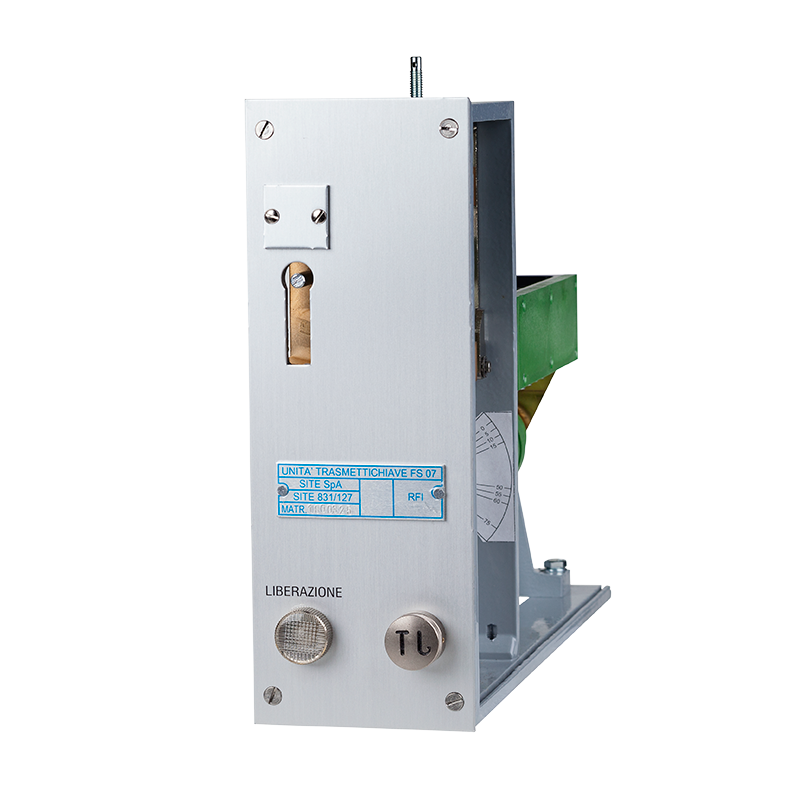 A device, supplied to F.S. personnel, that is equipped with a mechanical lock and a key that is normally blocked by an electromagnet. The key can be extracted after having received electronic consent from the Traffic Office Manager and allows the manual operation of the switch and switch lock. It is supplied in a watertight case (made of aluminium or fibreglass) mounted on a special stand and set near the affected switches and switch locks. 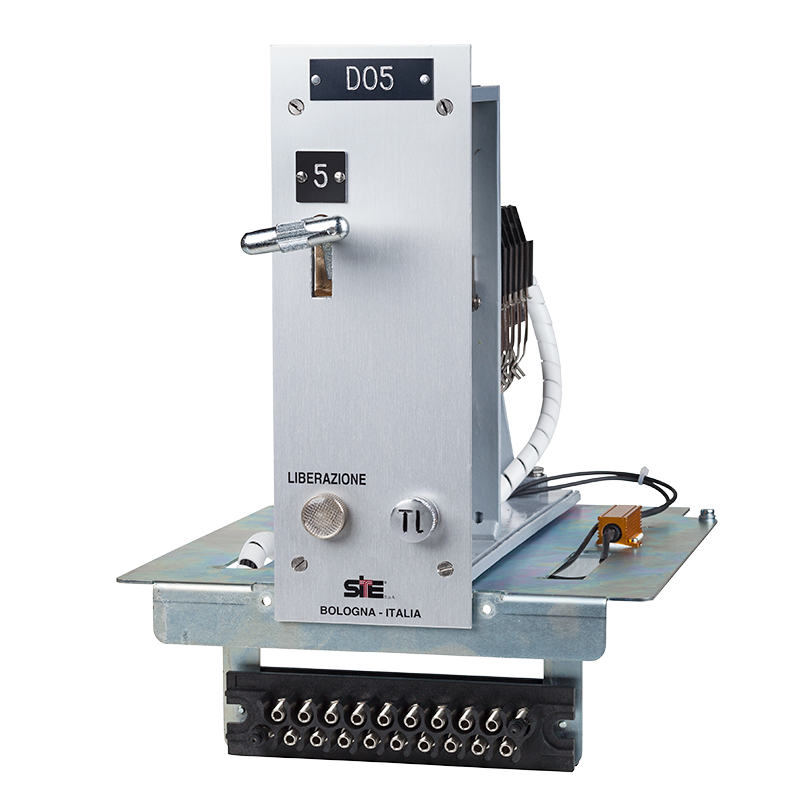 A device, supplied to F.S. personnel, that is equipped with a mechanical lock and a key that is normally blocked by an electromagnet. The key can be extracted after having received electronic consent from the Traffic Office Manager and allows unlocking the handle that permits the manual operation of the switch. The key cannot be reinserted and locked unless the handle has been repositioned in its seat, ensuring the Traffic Office Manager – as well as the key transmission unit itself – that the handle has been safely reset. It is supplied in a watertight case (made of aluminium or fibreglass) mounted on a special stand and set near the affected switches 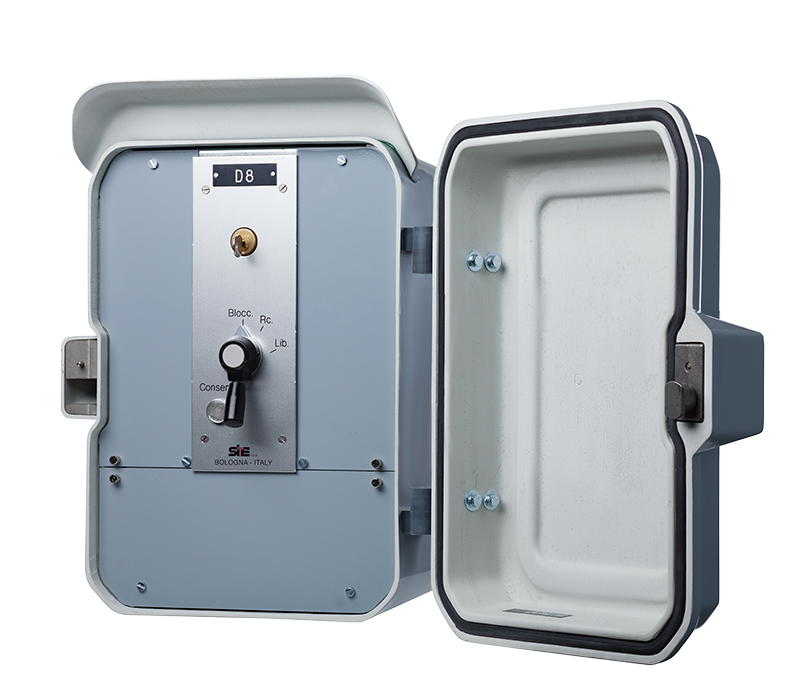 DEVICE WITH A YALE KEY

A device, supplied to F.S. personnel, that is used for blocking a switch in its normal position, disconnecting it electrically from the A.C.E.I. The device lever, normally in the “open” position, can be moved to the “blocked” position after having received the consent of the A.C.E.I. by means of the internal electromagnet; this consent allows the lever to exceed the intermediate “A.C.” (awaiting consent) position.
With the lever set in a vertical position, the Yale key can be removed, thus blocking the lever and preventing the switch from being moved by the A.C.E.I. The affected switch can be moved by the A.C.E.I. only after the key has been reinserted and the lever turned to the “open” position. With the lever in the “A.C.” or “open” position, the key remains locked in the device.
It is supplied in a watertight case (made of aluminium or fibreglass) mounted on a special stand and set according to the given station protection signals.

The device has two possible applications: